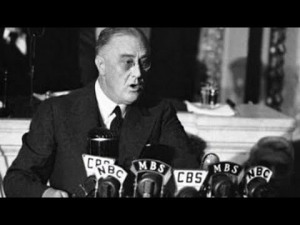 I actually agree with Paul Jay on something here. ( For a change ) President Franklin Roosevelt, his Administration and Congress, didn’t create a socialist economic system in America for good reasons. They left the American capitalist system in place but added regulations to it, as well as creating a public safety net in America which is the New Deal. FDR and the Democratic Congress’s back then didn’t even create a social democratic system where workers get most if not all their employment benefits like pensions, health care, etc, from the national government but where business is in private hands. But a public social insurance system that people could collect from when they’re out-of-work, or don’t have the skills that they need to get themselves a good job and aren’t able to pay their bills. As well as Social Security for people who don’t have a pension or a big enough pension.

If you look back at it now and I would argue if you look at this in the 1930s, the New Deal was actually the centrist approach compared with what was also on the table and being offered in response to the New Deal. You have Hoover Conservatives and Libertarians arguing that the Federal Government shouldn’t do anything in response to the Great Depression. And you had Socialists in some cases Democratic Socialists, as well as Communists who were arguing that the American capitalist system was the problem. And what should be done instead is to start nationalizing private industries, along with a socialist welfare state to provide workers the benefits that they had been getting from the private sector in the past. What FDR did was save the American capitalist system but make it better and stronger than it was before the Great Depression.

In President Roosevelt’s last term he moved further left on economic policy and became more interested in expanding the New Deal to create the Scandinavian social democratic welfare state. When he proposed his economic bill of rights that would’ve put the Federal Government in charge of guaranteeing workers benefits for all American workers. But what he was able to get passed into law as President was the New Deal which wasn’t a welfare system, but and insurance system for people to collect from, but only when they need it. Similar to how Americans use their auto insurance when their car is in an accident. But not to help them pay their everyday bills. FDR was a Progressive because he was very pragmatic in how believed government should respond to problems in the country. But didn’t govern in a way that would’ve put government in charge to solving every problem that every American ever faced.