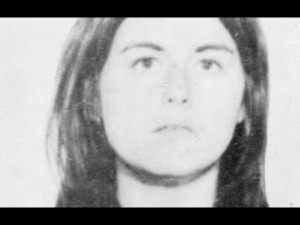 Source:The Film Archives– Unknown woman who perhaps was part of the socialist Weather Underground from the late 1960s and early 1970s.

“Students for a Democratic Society (SDS) was a student activist movement in the United States that was one of the main representations of the New Left. The organization developed and expanded rapidly in the mid-1960s before dissolving at its last convention in 1969.”

From Wikipedia about The Weather Underground.

“The Weather Underground Organization (WUO), commonly known as the Weather Underground, was an American militant radical left-wing organization founded on the Ann Arbor campus of the University of Michigan. Originally called Weatherman, the group became known colloquially as the Weathermen. Weatherman organized in 1969 as a faction of Students for a Democratic Society (SDS)[2] composed for the most part of the national office leadership of SDS and their supporters. Their goal was to create a clandestine revolutionary party to overthrow the U.S. Government.[3]

“With revolutionary positions characterized by black power and opposition to the Vietnam War,[2] the group conducted a campaign of bombings through the mid-1970s and took part in actions such as the jailbreak of Dr. Timothy Leary. The “Days of Rage”, their first public demonstration on October 8, 1969, was a riot in Chicago timed to coincide with the trial of the Chicago Seven. In 1970 the group issued a “Declaration of a State of War” against the United States government, under the name “Weather Underground Organization”.[4]

The bombing campaign targeted mostly government buildings, along with several banks. The group stated that the United States government had been exploiting other nations by waging war as a means of solidifying America as a greater nation. Most were preceded by evacuation warnings, along with communiqués identifying the particular matter that the attack was intended to protest. No people were killed in any of their acts of property destruction, although three members of the group were killed in the Greenwich Village townhouse explosion.

The Weathermen began to disintegrate after the United States reached a peace accord in Vietnam in 1973,[7] after which the New Left declined in influence. By 1977, the organization was defunct.”

I think a good way to look at The Weathermen would be look to Fidel Castro’s revolutionary movement in Cuba in the late 1950s. Except that the Castro Marxist-Communists in Cuba were looking to overthrow a dictatorial authoritarian regime there. But then what happened there is that they replace one dictatorial regime with another and turned Cuba into Marxist-Communist state which it still is today 60 years later.

The Weathermen were looking to overthrow a liberal democratic government and society in America and replace it with a socialist society. Where things like racism, materialism, individualism, sexism, homophobia, religious bigotry, masculinity, would be eliminated or those would be the goals of this group.

The 1960s is not just a fascinating time but a revolutionary time in America. The 1950s and 1960s are only one decade apart and the people who came of age in both decades are only a generation apart, but the two decades have almost nothing in common with each other and looked completely different culturally and politically. The difference between America and Russia, or North Korea and South Korea. Two very different looking and completely different societies.

The 1950s was the Christian-Right’s utopia where men worked and paid the bills. Women stayed home and raised their kids. Gays were buried in the closet culturally and perhaps you would need a rocket launcher back then to break the door down to let them out. African-Americans as well as other racial and ethnic minorities were treated like second-class citizens compared with European-Americans. Especially Anglo-Saxon men.

But thanks to Dr. Martin L. King and his civil rights movement African-Americans woke up and said they want their rights and would march for them and even give up their health and lives to get them. And had help from Caucasians who agreed with them and thought treating people as second-class citizens simply because of their race was evil. The Dr. King movement was the start of three left-wing movement’s in America. The King movement was a social-democratic movement.

The Baby Boomers start to come of age in the 1960s and start the Hippie movement ( the real Liberals back then ) because the 1950s lifestyle that they were part of as kids wasn’t good enough for them. They wanted the freedom to be themselves and be Americans which is what being an American is about which is the freedom for people to be themselves.

But then you have this radical socialist movement in America ( not to be insulting ) that believed the social-democratic movement of the 1960s led by Dr. King and others wasn’t good enough and didn’t go far enough.

Dr. King and Social Democrats of the 1960s, weren’t looking to overthrow the American Federal Republic and our liberal democratic system, but instead improve on it and establish an economic system that benefited more Americans so more Americans could benefit from our capitalist system.

What The Weather Underground and other New-Left socialist groups were looking to do was to overthrow the U.S. Government literally and create a socialist state in America. Some of these people might have been Democratic Socialists, but a lot of them were Communists like The Black Panthers and other groups who literally looking for revolution in America.

The 1960s and 1970s was a very violent time in America. We were going though terrorist bombings every week in the early and mid 1970s. Wealthy people were being kidnapped by Far-Left terrorists to get their money and then give it to poor people.

Not everyone on the Left are pacifists. Only Social Democrats and some Democratic Socialists are. Communists are not obviously and believe violence even if they don’t like it can be an effective and justifiable tool to accomplish their political objectives. And that is what The Weather Underground was which was a socialist militant political organization in America.