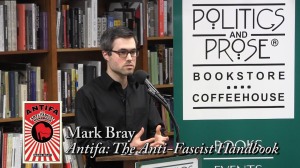 Source: Politics & Prose– Mark Bray, with what he calls the Anti-Fascist Handbook

If you’re going to label yourself anti-fascists, then at the very least that means you’re implying that you’re fascists. That you don’t believe in fascism and that you believe in free speech and freedom of thought. That people who disagree with you and even have beliefs that may offend you, have the same right to believe what they believe and say what they want, as people you respect and agree with. People that you consider to be political allies. And that you’re not going to try shut up speech and speakers, simply because you disagree with them, or are even offended by them.

If ANTIFA really were ant-fascists and opposed not just Nationalists, but Christian-Nationalists, Christian-Theocrats, Neo-Nazis, all on the Far-Right, but Communists and other Socialists on the Far-Left, who don’t believe people who they disagree with and are offended by have the same right to speak and believe that they do, but believed these political factions have the same right to free speech as people that agree with them meaning ANTIFA, then I could probably respect them. As a Liberal I love free speech and probably would even consider myself to be a free speech fundamentalist. But not just for people who share my liberal democratic values. But for people who are way to left of me like Communists who are part of ANTIFA and people who are to the right me. Conservative-Libertarians on the Center-Right and Christian-Nationalists and Neo-Nazis on the Far-Right.

But that is not what ANTIFA is about. They call themselves anti-fascists even though they believe in fascism and to use fascism to shut up Far-Right speakers and political activists, that they don’t like, disagree with, and are even offended by. ANTIFA are hypocrites at best. They are like so-called Conservatives who claim to hate big government, but are only talking about big government as it relates to taxes, spending, centralization, that has to do with the economy. But leave out that they actually want big government in people’s personal lives. And tell people what they can and can’t do in their homes and want consensual activities between adults should be legal or not. ANTIFA believes in using fascism to shut down and eliminate what they call fascism. So a more accurate name for this group would be ANTIFA-INO. Anti-Fascists In Name Only, because that is what they are.