Posted on September 17, 2016 by Ederik Schneider 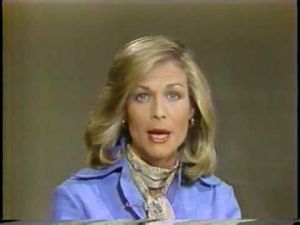 Jessica Savitch, was NBC Nightly News’s weekend anchor in the late 1970s and early 1980s, before she tragically died in I believe 1983. She was like 36 at that point and well on her way to becoming a lead network news anchor, or perhaps having another network news show. She had great presence, she knew what she was talking about, had great delivery and a great voice. And yes like Diane Sawyer, she was gorgeous and very cute and easy to look at and listen to.

Easter 1979, an important time. There was a Polish Pope in John Paul, who is a hero of the Christian-Right in America on social issues. But also a hero with Liberals and Conservatives when it comes to human rights. And was a major inspiration for the way falling in Eastern Europe with Slavic bloc there.

Iran was under a new regime and government and a huge energy producer that America relied on still at that point. But was becoming less predictable and stable just when America was going through an energy and economic crisis. Which just made 1979 an even more chaotic year with the bad economy and lack of affordable energy in the country.