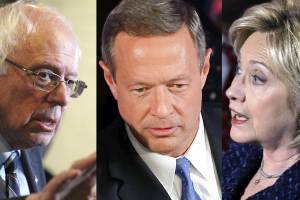 Source: This piece was originally posted at The New Democrat: NBC News; NBC News-YouTube Democratic Debate. The Pragmatic Progressive Versus the Idealistic Socialist

If you’re familiar with what I wrote about Hillary versus Bernie on Friday, you should know where I’m coming from here. Hillary, wants to be the pragmatic Progressive in this race who knows how to get things done, because she’s already done them. The pragmatic Progressive is someone with progressive goals, but is willing to settle for less than the perfect if it means the compromise moves the ball forward on the issue and makes things better than they already are. That is basically her message so far and she wants Bernie Sanders to be seen as a Far-Left idealistic Socialist, who sees things as he wants them and whose not in touch with reality. And because he doesn’t see the world for how it is does not know what is possible and what can actually get done. That is Hillary’s message in this debate.

Watching the two-hour debate which I thought was very good and NBC News’s Lester Hold and Andrea Mitchell, other than the Bill Clinton’s and women’s issues, I believe did a very good job. After watching the debate I saw it as a draw with Hillary scoring big on gun control. With Bernie still being unable to answer why he believes voting for the Charleston loophole which you could make a case was a reason for the tragic shootings in Charleston last year. Not Bernie himself, but the loophole and he’s still unable to answer why voting for that loophole was a good idea. Bernie, came back on health care to a certain extent. But Hillary now being a very effective counter-puncher (similar to Muhammad Ali) hit him back with, ‘the Affordable Act, was the best that we can get right now. Lets not scrap it and try to start over especially when we might fail. Instead lets build on the ACA, like with a public option for Medicare and prescription drugs and make it better.’

Bernie, scored again on Wall Street and Wall Street reform. Mentioning that Hillary has received a lot of money from Wall Street. But again Hillary, is the only one up there with a plan to reform Wall Street that Progressive economist and columnist Paul Krugman, has endorsed. Professor Krugman, hardly a right-winger, (and the sun is hot and water is wet in the world of obvious) who has a lot of support with both Progressives and Democratic Socialists. And they get to foreign policy and national security, where I believe they all do well when it comes to civil liberties. At least in this debate, but of the three Democratic candidates, Senate Sanders comes out number three behind Secretary Clinton and Governor Martin O’Malley. And he’s been in Congress now for twenty-five years and unless he wins the presidency, will be a member of the next Congress as well. I mean calling the King of Jordan, whose a dictator, a hero, is hard to back up and explain to put it mildly. Putting Cuba in the same class a Iran, which is a state-sponsor of terrorism, is also hard to back up.

So on second reflection this was not a draw, but a clear victory for Hillary Clinton. Not a blowout, but maybe 10-14 points, (hey it’s NFL Playoff season) because again she knows where both the Democratic Party is and where general election voters are. And is putting herself in the position of a mainstream Progressive very similar to President Barack Obama. Who knows where the country is what she and the Democratic Party can do and get done. Who has both the Congressional and foreign policy background to be President of the United States, because she knows how the real world works in Washington. Going up against an idealistic Vermont Democratic Socialist who apparently believes the rest of the country is as Far-Left as he is. And believes the country as a whole wants what he wants and will pay the taxes for it. And I think she did an excellent job of framing the debate as a pragmatic Progressive who understands how government works. Going up against an idealistic Socialist, who sees things as he wants them and doesn’t know how to work in the real world.