The National Journal: Clare Foran: All The Ways 2016 Contenders Want to Change the Constitution 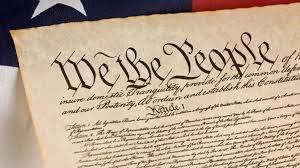 Source: The National Journal: Clare Foran: All The Ways 2016 Contenders Want to Change the Constitution

I have to admit, that 2015-16, at least not yet isn’t as interesting as the 2011-12 presidential election cycle, at least when it comes to the U.S. Constitution and proposed constitutional amendments. In 2011-12, you had so-called constitutional conservatives like Representative Michelle Bachmann and former Senator Rick Santorum, both offer several amendments to the Constitution. Representative Bachmann, wanted to use the Constitution so the Federal Government could outlaw pornography and same-sex marriage. Senator Santorum, would’ve actually gone further and supported the first two amendments, but added an amendment to outlaw gambling from the Federal level as well.

Now it seems to me anyway looking from this from the outside as a non-conservative, that someone who calls them self a Constitutional Conservative, would like the Constitution as is. And want to, gee I don’t know, conserve the Constitution as is. And leave the constitutional amendments to Progressives who want the Constitution to progress forward and create more, well progress. I mean this all sounds like commonsense anyway and maybe I just get from not being an addicted career politician whose only happy when I’m holding office and looking for the next step up in my political career. And as a result I feel giant craving for voters who I need to like me.

2015-16, isn’t as bad, at least so far. Hold the phone, because we still have more than fourteen months until the presidential election. You got a couple Democratic presidential contenders, offering amendments to overturn Citizens United. Bernie Sanders and Hillary Clinton. And few Republicans offering amendments to allow for states to define marriage as only between a man and women. Governor Scott Walker, offered that amendment. Senator Marco Rubio, offered an amendment to excuse people who choose not to buy health insurance from paying a tax on that. Mr. Big Government anti-Federalist Republican Rick Santorum, is back at it with an amendment that would have the Federal Government define marriage for everyone else. Between a man and women.

Keep in mind, the politicians and wannabe politicians that are offering all of these amendments, are all smart enough to know what it takes to amend the U.S. Constitution and why we only have like 27 amendments to it. They all know that there’s a better chance of Paris Hilton winning an honorary degree from both Harvard and Stanford, than the U.S. Constitution being changed anytime soon. What they’re counting on I believe at least is the people they’re speaking to, are unaware of how unlikely these proposals would ever become law. They’re speaking to their audiences and bases both Republican and Democrat. And represent a big reason why so many Americans don’t like American politics and don’t bother to even vote.