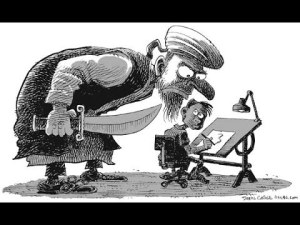 Hate speech, which I believe this anti-Muslim event and their drawings of Muhammad clearly falls under, is protected by the First Amendment. Government, can’t shut someone up, because they, or other people disagree with what someone is saying. Or are even assaulted and even find it hateful. You don’t like liberal democracy and our liberal First Amendment, perhaps America is not the country for you. And you would be better off living in the Middle East, or some place where you won’t have those issues to deal with.

And another great thing about the First Amendment, is when some asshole says something hateful about some group, guess what, that person opens them self up to replies and responses. People being able to tell that person what they think about what that person has to say. And even hold rallies against that person. Bill Maher, who I don’t generally put in the asshole category and tend to even agree with him when it comes to his criticisms about the Christian-Right and Muslims, when he doesn’t lump all Christians and Muslims as bad people, or whatever. Found out how liberal our First Amendment is last fall. About his comments over Islam.

When the Far-Right in America, whether its Rush Limbaugh or some other fathead, says provocative if not derogatory things about Latinos, Muslims, even women, Americans let Rush know exactly what they think about him. When Megyn Kelly even, accuses President Obama of trying to bring socialism to America, or whatever she’s complaining about the President, or says that he’s governing like a dictator, I correct her on my blog, when I don’t have anything better to do. You know Free Speech, is not for everybody. Meaning not everyone can handle it as far as listening to it. Of course all Americans have the First Amendment right, but not all Americans can handle other Americans having that same right. So they try to shut the other side up.

To quote President Andrew Shepard from The American President, which is one my favorite movies. “America is hard. You have to want it to be able to handle it.” More of a paraphrase than a quote, but you get the idea. And President Shepard played by Michael Douglas, was referring to Free Speech. He said that we all have this right, but that right protects all Americans right to Free Speech. And he basically said that the Free Speech is only worth something if Americans are willing to fight for someone else’s right to speech. The right for someone to say and believe things that you might find disgusting.

Insulting speech and hate speech, we have to fight for those things to. Because when Americans are no longer able to be critical and even say things that are offensive, we lose the ability to be individuals. And end up just agreeing and loving each other and never learning anything new. Because we see everyone as perfect. And there’s nothing perfect, or collectivist about liberal democracy and Free Speech. It’s a very imperfect system and form of government. But it’s still the best system in the world and why so many people leave their country that doesn’t have these rights to come here. Instead of going to Europe, or Canada. Actually, people still leave Europe to come to America.