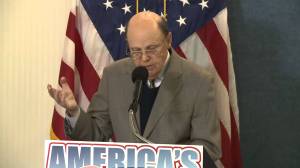 Source:USA Survival– Allan Ryskind, talking about his book about Communists in Hollywood.

“Allan H. Ryskind is the son of famous Hollywood screenwriter Morrie Ryskind and a long-time editor of Human Events who worked on this very important book “Hollywood Traitors” for many years. He says: “…I would now like to challenge Hollywood movie makers, actors and directors, conservatives, liberals and even some progressives. It’s hard for me to believe that most of you honestly think of yourselves as backers of Joe Stalin and all his criminal activities that are now part of history. So why, if you don’t view yourselves as worshippers of this evil ruler, do you keep celebrating the lives of your colleagues who did?”

Who are these people making the case that there weren’t Communists and Socialists in Hollywood? Of there were and still are today! Some of them are self-described as Socialists and supporters of Hugo Chavez in Venezuela and Fidel Castro in Cuba. Sean Penn and Michael Moore, would be excellent examples of that. But we aren’t talking about the Rosenberg’s here who were put to death for espionage in favor of the Soviet Union against the United States. We are talking people who support an economic and political system that is much further left than our liberal democratic private enterprise system.

Socialists and Communists in and out of Hollywood like Cornel West and Angela Davis, support completely transforming the American liberal democratic federal form of government. Where so much is expected out of the individual to take care of themselves and live in their own freedom. And creating an economic and governmental system where the national government would have a lot more responsibility for looking after the welfare of the people and taking care of them. They don’t want to turn America into a Soviet style authoritarian state. But create a social democratic state where the central government has a lot more responsibility for the people’s welfare. Similar to Scandinavia.

The so-called Hollywood Reds of the 1940s and 50s were very similar . They had their own Far-Left political beliefs and spoke out in favor of socialist causes in America. But weren’t traitors to their country and looking to overthrow it and certainly didn’t try to do that. But simply use their First Amendment and Fourth Amendment rights to advocate for socialist causes in America. And move America into a more socialist direction. But with the U.S. House Un-American Activities Committee, you things these Hollywood workers were secret spies for Russia or something. Trying to overthrow the American liberal democratic form of government.