Posted on February 12, 2015 by Ederik Schneider 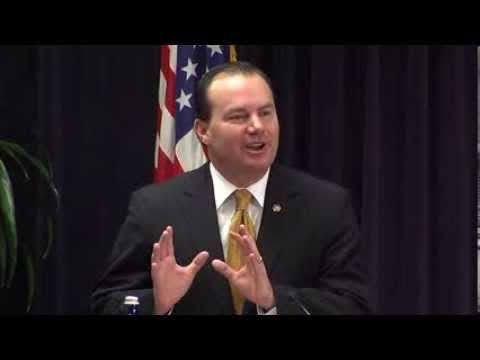 “On February 11, 2014, Senator Mike Lee, R. Utah, gave a short speech to advocates attending a Washington, D.C. conference on the need to address our mass incarceration and reform the U.S. criminal justice system. The event was cosponsored by The Leadership Conference Education Fund and the Vera Institute of Justice, and was held at the Georgetown University Law Center’s Gerwirz Student Center.
Read full speech here:U.S. Senator Mike Lee.”

From The Leadership Conference

It shouldn’t be surprising that both John Cornyn and Ted Cruz are in favor of real criminal justice reform that reduce sentencing for people convicted of non-violent sentences. They are both from Texas and their state has one of the most expensive criminal justice systems both on a per-capita basis, but also in total budget in America.

Texas as right-wing as it gets stereotyped (and for good reasons) is one of the leaders now when it comes to criminal justice reform and prison rehabilitation. Again because their state has so many people in prison. I believe the largest prison population in the country at least on a per-capita basis. California might have more prisoners as it relates to total numbers.

John Cornyn is the Senate Assistant Majority Leader (the number two Senate Republican right behind Mitch McConnell the Senate Leader) so he has a lot of sway as far as what will come to the Senate floor in this Congress for consideration.

Senator Ted Cruz also from Texas is more of a conservative libertarian or has those leanings. So he’s interested along with Senator Rand Paul and Senator Mike Lee in criminal justice reform.

So having these three Senate Republicans in the same group on an issue with Senate Democrats like Sheldon Whitehouse, an LBJ Progressive, Dick Durbin someone who I would call a Classical Liberal and Pat Leahy the Ranking Member on the Judiciary Committee a strong opponent of the War on Drugs, is actually not that surprising for people who follow Congress on a regular basis.

What this Senate coalition is talking about is reducing sentences and for non-violent offenders and not sending so many of them to prison in the first place. This is really about the War on Drugs and getting drug offenders who were simply arrested for illegal narcotics possession and being high on those drugs, into drug rehab instead of prison.

They are also talking about over-criminalization and arresting people for doing things that actually don’t hurt other people. Online gambling would be an example of that. Marijuana possession would be another one, I would add adult prostitution as another one. And this is something that Congress should’ve done a long time ago.