Don’t get me wrong, I’m in favor of what I call and others on the center-left call common sense gun control. And no that doesn’t mean gun prohibition and outlawing the second amendment. It means prohibiting stupid and crazy people and criminals who might be both, or even highly intelligent from owning or possessing firearms in America. And I’m not talking about preventing your average serial jaywalker from having a gun. Or even above average or below average serial jaywalker. For example since I qualify as a serial jaywalker and damn proud of my illegal walking across the streets, I wouldn’t be banned under common sense gun control from owning or possessing a firearm. As long as I don’t go stupid or nuts or become a real criminal that actually hurts innocent people. Which is who I’m talking about.

But gun control is like putting out a burning house with a baby’s spit, to try to solve a much larger problem and to put it simply. And if that is still not simple enough for you, you might be on my list of people who shouldn’t own or possess firearms in America. We need to go much further than that and if you are seriously interested in passing a constitutional amendment and are concern about gun violence, I might have an idea for you. How about we pass a constitutional amendment that prohibits idiots and mental patients from owning or possessing firearms in America. We’ll call it the mentally handicapped violence prevention amendment, or HVPA for all of you acronym junkies. Who obviously have way too much free time, or you wouldn’t be an acronym junkie.

I know what you are thinking, the politically correct crazy Left (MSNBC) would go nuts over this, because for one their gun rights would be taken away. But they would have a problem with Americans being denied rights simply for being stupid or crazy and claim discrimination towards stupid and crazy people. And perhaps invent new terms like nutism, which would be like racism for crazy people. And perhaps idiotism, which would be like racism for, well for idiots, if you’re keeping score at home. And if you are, similar to the acronym junkie, get a life.

I’m not trying to make fun of a very serious subject here. Strike that, of course I am, but hopefully doing it in a way that makes a serious solid point. Which is as long as we have stupid and crazy people with access to firearms in America, legal or illegal they’ll find ways to get guns and then take out their frustrations on people that they see as threats, who are completely innocent. If you don’t believe me and perhaps see me as a reporter for The Onion or something, (I wish) just look at the mental condition’s of our shooters the last what four years now and the people they’ve hurt or killed as a result. 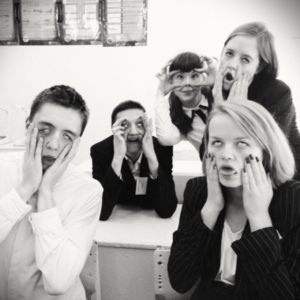