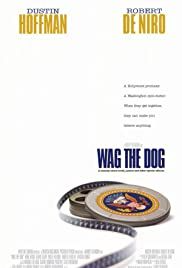 “After being caught in a scandalous situation days before the election, the president does not seem to have much of a chance of being re-elected. One of his advisers contacts a top Hollywood producer in order to manufacture a war in Albania that the president can heroically end, all through mass media. Written by Christy.”

“Shortly before an election, a spin-doctor and a Hollywood producer join efforts to fabricate a war in order to cover up a Presidential sex scandal.” 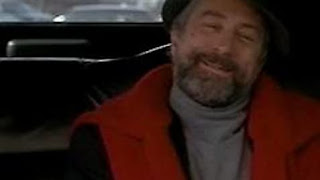 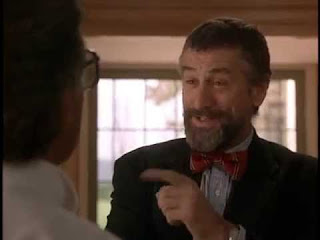 The late 1990s was a crazy and fascinating time for many reasons politically and other things and also one of the best periods for Hollywood as far as making movies. Some of my favorite movies of all-time come from 1997-99. Wag the Dog 1997 being one of them, Jackie Brown 1997 being another as far as I’m concern the best Quentin Tarratino movie of all-time. Out of Sight 1998 being another one, Primary Colors 1998 another one of my favorite movies. Cop Land 1997, The Big Lebowski 1998 maybe my favorite comedy of all-time with a great comedy duo in Jeff Bridges and John Goodman. Very Bad Things 1998 another very funny movie, Wild Things 1998 very funny.

But one movie in particular because it fit in perfectly with the times especially politically: the Monica Lewinsky scandal breaks in January 1998 the same month that the Pope visits Cuba which I doubt made the United States Government very happy especially with their embargo policy on Cuba. And also when President Clinton was probably at his most popular. Wag the Dog came out about a year earlier, in the Summer of 1997, two American embassies in East Africa were bombed and then America attacks both Sudan and Afghanistan. Because the Clinton Administration believed that the Sudanese Government had a role in the African bombings.

Again we attack Afghanistan as well that same month August 1998, but here’s the thing and why Wag the Dog is so relevant. That movie is about people working for the White House creating the appearance of a war in order to get the media and people’s attention off the latest sex scandal of the President.

After America attacked Sudan and Afghanistan by sending in missile strikes, Republicans in Congress, Senator Dan Coates of Indiana who is generally a pretty rational and responsible person, right away questions whether the missile strikes had something to do with the Lewinsky scandal. And was done as a distraction just like in the movie Wag the Dog and even said something to that affect: “I wonder or I hope this is not a Wag the Dog moment for President Clinton”.

The movie came out just a few months before the Lewinski scandal broke. Wag the Dog is a movie about the President being in trouble with another sex scandal. He’s a popular President up until the scandal and looks like he’s flying to reelection.

But the scandal breaks and of course his opponent in the race a U.S. Senator played ( by Craig Nelson ) try’s to make the most out of it. Senator Nelson ( let’s say ) is way down in the polls and is looking for anything he can to break through. Someone in the White House calls in a veteran big shot political strategist to deal with the scandal ( played by Robert DeNiro ) and he gets the idea that what the President needs is a distraction. To get the country’s attention off of the sex scandal and comes up with the idea of a fake war and hire a Hollywood producer played by Dustin Hoffman to put this show together.

Wag the Dog is a great movie for several reasons: one because of how relevant it is, perhaps not realistic though especially in the information age. And this movie did come out in 1997 as far as them being able to cover up a fake war without the Defense Department, CIA or someone knowing about it.

But it’s still a very funny movie, well-written and a great cast Robert DeNiro, Dustin Hoffman, Bill Macy, Ann Heche, Craig Nelson, Dennis Leary and others. And how desperate that these politicos were to save a Presidency and would even create a fake war to do that.