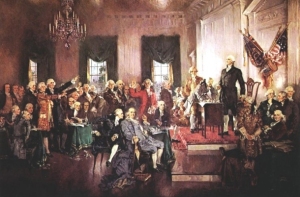 Michael Burstein’s amendments, or even new United States Constitution was not as radical or social democratic as I was expecting. I perhaps was expecting to see proposals that would move America away from its federalist tradition and system and try to move to more of a unitarian form of government. Where the states aren’t nearly as powerful with as much responsibility, because that responsibility would now be in the hands of the Federal Government. Michael Lind who also writes at Salon has proposed doing things like that.

But to get the Burstein proposals and what I would do differently.

I’m against them for both the U.S. House and U.S. Senate and I’ll tell you why. I don’t like the idea of government telling me or any other American who we can vote for. And this is what I would do differently. Guarantee the Right to Vote, so there’s one amendment I would like to see to the U.S. Constitution. And end gerrymandering for both Democrats and Republicans. How you do that? The states would still write their U.S. House districts under the condition that each district would have to represent the state. So you a state 55-45 one way or the other or even closer than that, say like Texas or California.

California is more like 70-30 for Democrats. The state couldn’t put all the Democrats or Republicans in one district or a few districts. They would have to spread them out. And if the state is 55-45 for one party or the other or closer than that, than that is how the districts would look. So the majority would get a majority of the districts, but it would have to be represented of their overall state majority. And the state would no longer look like that only Republicans or Democrats would live there. Because the other party would have several districts that favor their party as well.

I’m against that because now we are not talking about limiting voters choice in who they can vote for. But limiting the President’s choice in who they could appoint or reappoint, which is my next point. The U.S. Supreme Court is simply under represents a country of 310 million people with fifty states. Not proposing to turn the U.S. Supreme Court into a democratic institution. Just saying that nine members is simply too small, especially in a country this huge and this divided politically. I would go to fifty justices not including the Chief Justice and their deputy, as well as a Minority Leader to try to organize the minority on the court. One U.S. Justice for each state. and have each Justice serve six-year terms and then have to be reappointed to stay on the Court.

Another bad idea. Why? Because now you’re taking more power away from American voters. And you may argue that the current system does that. True, but this would be another way of doing that by saying that the only roles that voters have is to vote and perhaps volunteer. But not be able to endorse the candidate or incumbent of their choice. The person that may represent them in the House or Senate or as President. And what would make that worst that now all us as taxpayers would be forced to subsidize candidates and incumbents that we simply do not like and perhaps are even doing a bad job. Public financing is another way of saying taxpayer financing of public elections.

But here’s what I would do instead. Full-disclosure of all campaign contributions to call campaigns. Everyone and every group that raises money for political campaigns would have to report those contributions and contributors to the Federal Election Commission that would be publicly reported. So no more dark money or dark packs because these groups Left and Right will now be public and so would their contributors. And if they are controversial, candidates and incumbents would think twice about taking money from them if they believe those public contributions could hurt them politically. And we would probably see less negative and false advertising as a result.

Right to a Quality Education

Finally Michael Burstein and I agree on something! Now the only question is how we bring that about. The Federal Government of course in a country this size and diverse should not be running the education system. Or create one education system, because the fact is we have hundreds or more education systems in this country. Which simply comes from being this big, this diverse, this spread out and frankly this liberal with all of the decentralization of power in the country. At least at the governmental level.

But with all the poverty and impoverished areas of the country and with education being a national priority because of how it affects the economy, there has to be a real federal role for education in America. Which is mostly about funding and research and to a certain extent seeing that basic needs are met. Are all students getting an education or regardless of income, race, ethnicity, or not and that includes special needs students. We obviously can’t guarantee equal outcomes as much as Socialists may believe they can. But what we can guarantee is that every student has a quality opportunity to be successful in America regardless of where they go to school.

So what the Federal Government should do is give the underserved school districts and states the resources, financially mostly that it needs to see that all of their students have the tools that they need to do well.

Encourage financially people who are well-educated to teach in underserved areas.

Encourage things like public school choice so no student is forced to go to a low-performing school.

Lets pay teachers like lawyers and doctors and the Feds could help with the financing to pay those salaries.

Make college free for all qualified high school graduates who serve in public service for at least two years after graduating college. The Feds could finance that. And for qualified high school graduates who decide not to serve in public service after graduating college, make their college affordable with a college financing program that they, their parents, their employers and their parents employers would all pay into until the student is ready for college.

Michael Burstein proposed a lot of things I disagree with as far as what he would do. But did put some goals and ideas on the table that if were amended the way I did, or something close to that, I could go along with that would improve our liberal, not social democracy in America.
.