Posted on September 4, 2014 by Ederik Schneider

I’m going to try to get through this blog without sounding like a partisan hack which will be difficult. Because if you’re on the Right and ideologically disagree with me, you’re probably going to disagree with this blog. Call it a hunch, but think about these facts for a minute, I know thinking for a whole minute that’s like 60 seconds how do you get through that sober, but think about these things for OK 60 seconds and then take a deep breath.

When we close out the 1990s (and yes you’re correct if your thinking 20th Century) America was at peace, we had a booming economy of something like 5% economic growth and a 4.5% unemployment rate, record low poverty level in the United States of around 13%, we just balanced three straight Federal budgets. The first balanced budget since 1969 and we haven’t balanced one since. Our Federal Government only spent around 18-19% of GDP, instead of 25% like today. (A number I would like to get back to in a future blog)

The stock market hit 10K for the first time in American history I believe in 1998 and as powerful as Monica Lewinski was, she wasn’t able to stop any of that success. We got through a Gulf War, the Balkan Wars, the first World Trade Center bombing in 1993, the Oklahoma City bombing in 1995 by an Anglo-Saxon Christian man, not by a Middle Eastern terrorist that was stereotyped. The 1995 Federal Government shutdown, deficit reduction, two East African embassy bombings and America remained the Land of the Free, unless you were gay or smoked or sold pot.

Now lets move ahead to a completely new century and decade which sounds like forever right, actually move ahead from December 31, 1999 to January 01, 2000. You can literally get their in a second where we have a presidential candidate whose famous thanks only to his father in George W. Bush and the other presidential candidate who on paper looks like has the qualifications to be President of the United States. But can’t beat the guy who had to cheat off the person who could barely speak english to graduate high school. (Paper doesn’t win elections candidates and incumbents do)

Better known as Bush V. Gore or Gore V. Bush you get the idea and we were treated to new phrases like hanging chads, dimple chads, over-votes, under-votes, not knowing who the next President was going to be a month after the election. A 50-50 Senate in 2001 basically favoring Senate Democrats, a divided Congress with a Democratic Senate and a Republican House from 2001-03. Two unpaid for tax cuts, two Middle Eastern wars where we’ve borrowed all the money to pay for them now 2T$ and counting, a 500B$ Medicare Prescription Drug Benefit again all borrowed money.

Kerry-Bush in 2004 where again a schmuck for a President who locks himself out of his own Oval Office who declares Mission Accomplished and Victory in Iraq, just one problem there. President Bush was 8 1/2 years early, ah damn I forgot about 9/11, the Republican Party losing Congress in 2006. Thanks to the Afghan and Iraqi Wars all this happening in ten years and there’s more. I disagree that the 2000s are the worst decade of all time or either in my lifetime, I believe the 1970s was worst even though I was only alive for four years of it. And actually only remember 1978-79 parts of it because I started nursery school then.

But the 2000s if I wasn’t a political, current affairs and history junky I wouldn’t want to relive or go through another decade like that because we’ve paid a heavy price for it and have had some of our individual liberty taken away from us. With things like the Patriot Act and is a decade that we’ll be paying for at least another decade if not two decades with all the money we’ve run up on the national debt card. 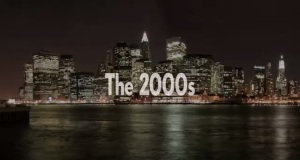 Blogger on a whole host of subjects.
View all posts by Ederik Schneider →
This entry was posted in Reason and tagged Bush v. Gore, Nick Gillespie, President George W. Bush, The 2000s, The 2000s Decade, The 9/11 Attacks, The Great Recession, The Patriot Act, The War in Iraq, War in Afghanistan, War on Terror. Bookmark the permalink.