The Nation: Opinion: Robert Borosage: Time to Stand up For a More Perfect Union 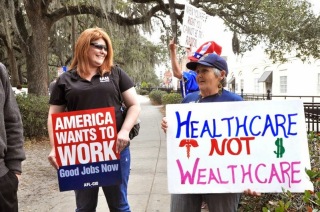 The Nation: Opinion: Robert Borosage: Time to Stand Up For a More Perfect Union

I didn’t see much from Robert Borosage about as far as how to build this movement to “build that more perfect union”. And what exactly what that would look like and what policies should be developed to make that happen. So what I’m going to do as a Liberal and not as a Socialist or Progressive is layout what a more perfect union would look like in a liberal democratic society like America.

One of the areas that liberal New Democrats and I’m one of them disagree with the old FDR Progressives and today’s Bernie Sanders Socialists is what should be the goal and role for government in Americans when it comes to the quality of Americans lives. Lets say today’s Progressives or Socialists (to be more accurate) believe in equality and that government should be so big and having so much authority to take care of people and make sure that no one has too little or too much.

Liberals believe in freedom pure and simple that an educated society is a free and developed society. Because an educated society has the tools that they need to live well and live in freedom. As the great libertarian Economist Milton Friedman said “you can’t have equality without freedom”. That for people to get everything that they can have succeed as much as possible they have to be free. And you become free by having a good education with the tools that allow for you to get that good job and the ability to make the decisions that you need to make to live well.

Today’s Progressives or Socialists would say that “freedom is risky or dangerous. And when you allow for people to have so much freedom over their own lives you give them the freedom to make mistakes that we as a society as a whole will end up having to pay for down the road. So what you need is government that is so big that it keeps people at the top who live in freedom from having so much and takes a lot of their freedom away in the form of money to take care of everyone else”.

And this is really the two competing visions in the Democratic Party now and not just as it relates to the economy, but personal affairs as well. The differences between freedom and individual decision-making from the JFK/Bill Clinton New Democrats. Versus the Bernie Sanders socialist wing of the party that trusts government over people and business’s and puts their faith in government to make the best decisions for everyone involved.