Mundane Matt: Video: Is Fred Phelps Dying? The Leader of the Westboro Church

I’m not going to say that I hope that Fred Phelps is dying (at least not in public).  That would simply not be the polite thing to do.  It is not consistent with our social mores to wish people to die.   You might think the world would be a better place if a certain person were dead, and Fred Phelps is the perfect example of such a person, but anyone who considers themselves civilized cannot publicly wish such a person to die.

But Fred Phelps dying.  If his organization goes out of business as a result, that would definitely be a great thing, not just for homosexuals or homosexual military personal but for the military in general and for anyone who hates bigots and bigotry.  It is indisputable that without Fred Phelps and his group, the world will be a better place.  Modern Christianity is against hate and hating people for having different lifestyles.  Christ said, “Love thy neighbor as thyself.” 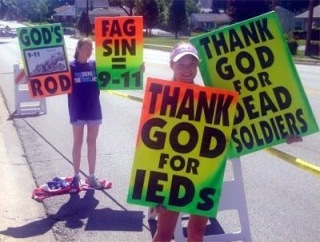