.
This post was originally posted at FRS Daily Journal on WordPress

1985 is the perfect example of why MLB should’ve went to the three division format in both the American and National League with the playoff wildcards well before 1994. Because you had four ninety win teams in 1985 and each division champion would’ve had at least ninety wins. The Toronto Blue Jays in the AL East, Kansas City Royals in the AL Central, and the Anaheim Angels in the AL West. The New York Yankees as a wildcard team in 85 would’ve have more wins than every division winner except for the Blue Jays. If you go with two wild cards in each league, the Detroit Tigers would’ve just barely misses the AL Playoffs in 85 with 84 wins, a game behind the Chicago White Sox. 1985 was a great year for MLB and the Yankees and Tigers were both in the playoff race that year. And played each other on NBC which is this game. 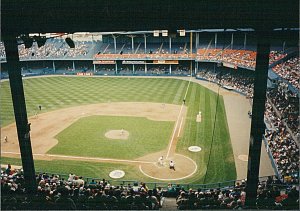