The Globalist: Opinion: Uwe Bott: “The Need For U.S. Constitutional Reform”: Over a Government Shutdown? 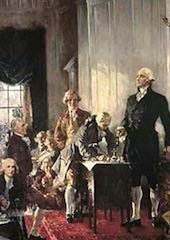 The Globalist: Opinion: Uwe Bott: “The Need For U.S. Constitutional Reform”: Over a Government Shutdown?

I’ve blogged about this before, but the problems with America do not have to do with the United States Constitution. But the some of our so-called leaders and public officials who in some cases represent a hard fringe on the Far-Right, or Far-Left. Some represent the people who send them to Washington. And some actually represent their constituents pretty well. And deserve to be reelected over and over. And to say that we should change our Constitution just because there is precedent to do so, is not a reason.

It is like saying, “I had steak for dinner last night so I might as well have it again tonight.” Without looking at what else is available to eat that night and what would be the best thing to eat that night. And if you are going to do something drastic like changing the U.S. Constitution, the document that fathered liberal democracy in the world and what a lot of other democracies are built around with all the rights and freedom and what comes from that, as well as the checks and balances and separations of powers, you gotta have a hell of a reason to change such a great document. That has only been changed I believe twenty-seven times in two-hundred and thirty-seven years.

To say we must change the U.S. Constitution because we have a faction in one party in one chamber of one branch of government, essentially holding the rest of the government and I don’t like using this word unless I’m actually talking about real hostages, But holding the rest of the government back (for lack of a better word) unless they are able to kill a law that has already been settled by the U.S Supreme Court and a general election where President Obama is reelected to go along with most if not of the members of Congress in the House and Senate, is crazy. The answer is to vote out people who aren’t governing responsibly.

All of these Congressional Democrats who supported the Affordable Care Act, voted for it and even wrote parts of it. To change a Constitution, just because House Republicans don’t like one law, is not a good reason. What you do in that situation is what Democrats are doing now and hold them accountable. “These are the people who are preventing the Federal Government from reopening, because they’ve failed over and over to get a law killed that they hate.” And you keep pointing them out in public until their leadership gets the message. And says, “enough is enough. We aren’t going to let this fringe ruin us in the next election.” And you hold them accountable again at the ballot box in 2014 and get them replaced by responsible adults.

If you love social democracy so much, how about living in one for a while. And see if you like that more than America. And live somewhere where elections do not have consequences. And votes in a way do not matter. Because if a majority of people and that majority just might be one and they decide that current government in power is not popular, new elections can be called right away even if there is already a new government.

America, is a Constitutional Federal Republic in the form of a liberal Democracy. And we are different and we have basic fundamental rights that can’t be taken away from us. Like being abused my a majority and we have minority rights in this country. And just because 50.1% of the country thinks people shouldn’t be allowed to do something, doesn’t necessarily mean they get to rule over the 49.9% of the country that says, “how we live our own lives, is none of your damn business. So why don’t you butt the hell out.” As we are seeing with the gay rights cases that going through the court system including gay marriage. Where gay marriage bans are getting thrown out. Even gay marriage bans that were popular and voted for by the will of the people, so to speak.

Social democracy, is essentially rule by majority including the majority being able to rule over the minority. And being able to tell them how they can live their own lives. And that is just not how liberal democratic America rolls, so to speak. We say power to the individual and let them govern themselves as long as they aren’t hurting innocent people. And we have constitutional rights that can’t be taken away from us that protect our privacy. And our ability to live our own lives that can’t be taken away from us by a popular vote. And as I said before the problem with America, is not our Constitution. But some of our public officials who do not understand it who need to be kicked out of office.