.
This post was originally posted at FRS FreeStatePlus on WordPress

Too bad for Anthony Weiner, or can we call him Tony now, I mean seriously, why is The Weiner the only man in America that can’t go buy a nickname? Does his sexting scandal really make his so much more special than anyone else. Too bad his first name isn’t Richard and he’s not short, because Little Dick would’ve been the perfect nickname for him. I hear there are real job openings for real jobs out there in New York City and perhaps Tony should apply for one of them. Unless the job requires him to keep his pants on the whole time he is working. Perhaps Tony should look for a real job and get out of politics.

Apparently Tony Weiner is the only career politician/workaholic who can’t find a job. So that would be something that would make him special. If you saw The Onion report about the guy with the 42,000 jobs back in 2012, may that is why Tony can’t find one, because that workaholic has every job that was still available in New York City. Being a workaholic without a job must be tough. That would be like a fish with no water and trying to learn how to swim. Or being an institutionalized prison inmate who has spent most of your life in prison and learning that every prison and jail in America is about to be closed. And you’ll be released on the outside as a result.

With Tony Weiner’s professional background and that the fact that he’s a Weiner, he shouldn’t have any real trouble finding work in New York City. Wait Rudy Giuliani and Mike Bloomberg closed down most of the strip clubs in New York. So maybe Tony will support the nanny state less now since it is now costing him work that he’s qualified for. But he’s a former U.S. Representative and sexter, so he would be perfect in Washington, if he wants to come back. And he could get himself involved in sexy scandals there, without worrying about it costing him his job. 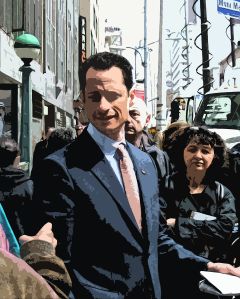 Full-time blogger on a multiple ray of topics and subjects, because of multiple interests.
View all posts by Erik Schneider →
This entry was posted in The Onion and tagged Career Politicians, News Satire, Onion News, Political Humor, Politicians, Stop Lights, Stop Signs, The Onion, Workaholics. Bookmark the permalink.