Strange Days: Break on Through

Posted on September 4, 2013 by Derik Schneider

I’m a big Doors fan like many people, especially Jim Morrison himself and how he presented himself, as well as his talent as far as a performer, his intelligence, his ability to communicate and his ability to write and sing. As are many people and I see him as a rock god and someone who would’ve been a no-brainer for the Rock and Roll Hall of Fame had he lived a normal life as far as years. And had he gotten his act together so to speak, sobered up and got back t business. And because The Lizard King has so many fans, there are now never Doors cover bands and Jim Morrison covers.

Strange Days is the best Doors cover band that I’ve seen and their lead vocalist is the best Morrison cover that I’ve seen. Except for perhaps his hair being a bit longer than the real Lizard King, he has the size and look of the Lizard King down. The patent Jim Morrison skin-tight black leather jeans, with the cowboy boots and the concho belt and he is able to move in that outfit and of course his voice. And the band itself has the sound of the Doors down. And they do a great job of playing The Doors. 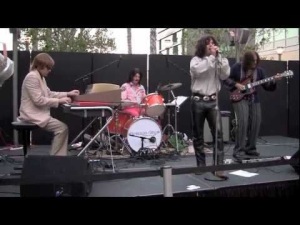