.
This post was originally posted at FreeStatePlus on WordPress

The 1960s is a generation that I would’ve liked to experienced as an adult, but I come from one generation up, so that’s not possible. But it was really a revolutionary decade both politically and culturally with all sorts of change in America. With the civil rights movement, the Great Society, the Vietnam War, the Culture Revolution and what I and others call the New-Left in America. Which is furthest left at least as far as numbers and members than America had ever seen at least in the 20th Century.

The 1960s was a decade of revolution and experimentation. Where people who grew up with parents that saw the world as black and white and right and wrong. With any other type of viewpoint being seen as crazy or, Un-American. You were on this side or that side and if neither side was good enough for you, you were an outsider. It was a decade where Boomers pushed it to the limits as much as possible. They finally felt free to live their own lives and not have to live under the umbrella of how their parents lives. And be able to live life the way they wanted to.

And one of the interesting things about the 1960s was it was completely different from the 1950s which was somewhat stagnant and where Americans were supposed to be a certain way and live their lives a certain way. Just like their parents and grandparents and that was completely overturned by the 1960s where people were now allowed to be free and live freely and not be looked down by society for the most part. And the Baby Boom generation made that happen.

It is kind of hard to sum up a decade that had John F. Kennedy as President in 1961 and then assassinated almost three-years later when most people thought it was impossible that an American President could be assassinated, or an American would even attempt to assassinate a President. That also had the civil rights movement, LBJ’s Great Society, the Vietnam War, the anti-war movement, the cultural revolution, the environmental movement, gay rights. And Americans finally coming out of their cultural coma and realizing or going “I’ll be damned! The government actually lies to their people”. And I could go on, but I don’t think I can do it. 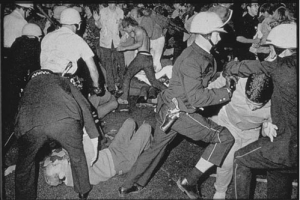