.
This post was originally posted at FRS Daily Journal on WordPress

The Bullets-Knicks rivalry in the 1970s, was one of the best rivalries in the NBA and represents something that has almost disappeared in the NBA, which are rivalries. The 1970s and 80s, you had the Celtics-Lakers, Celtics-Knicks, Celtic-76ers, 76ers-Bullets, Bullets-Knicks and perhaps a few other great rivalries in the NBA that you don’t see that much anymore in this league with the great history that it has. Baltimore and New York are roughly two-hundred miles from each other and these were two of the better franchises in the NBA in the early 1970s.

The Bullets were one of the better franchises in the NBA in the 1970s period, both in Baltimore and then later in Washington, actually Landover, Maryland to start the 1974 season. They relocated to Landover thinking they could hold onto the Baltimore market and capture the Washington market, but thats a different story. And for the Bullets to achieve a lot of the success they had in that decade, four conference championships and winning the NBA Finals in 1978, they had to beat the Knicks to do that. 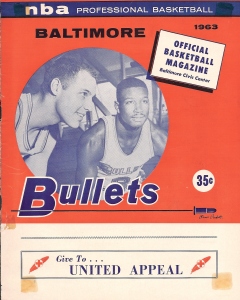