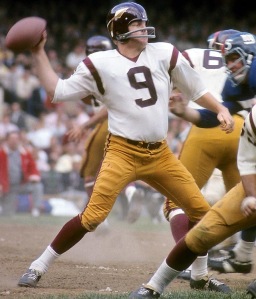 This post was originally posted at FRS Daily Press

To look at some of the shortcomings of former NFL QB Sonny Jurgenson, before I get into why he’s one of the top 10 QB’s of all time, maybe top five, those shortcomings are more about the teams that he played for. He played for very good teams in Philadelphia in the early 1960s and they started sliding by the mid 60s. The Eagles were annual losers by the late 60s and early 70s and Sonny gets traded to the Redskins in 1964. Who hadn’t had a winning season even since 1955, which would go on for another five seasons in Washington.

I’m not making excuses for Sonny, because he did play a long time without leading a team to a championship. Eighteen seasons from 1957-74 but for the most part, he played for a lot of mediocre teams. Where a good year was 7-7 or 7-5, 8-6. These are records that generally doesn’t get teams to the playoffs. So even as Sonny was playing for mediocre teams, he was a great QB on those teams, the best player on these teams. Doing every he can for teams that weren’t very good, had good players, great even, but not very good all around teams. Teams that struggled to win every week.

The way I describe Sonny Jurgenson, was a championship caliber QB who played on a lot of mediocre and even bad teams. I still believe that had Sonny played in Super Bowl 7 against the undefeated Miami Dolphins the Redskins would’ve given the Dolphins only loss that year. Because the Redskins did have a great team on both sides of the ball and I believe a better all around team than the Dolphins. That at least had more talent.

But of course Sonny was hurt with a busted ankle, so that didn’t happen, but the Redskins didn’t win championships in the 1960s and 70s because of Sonny Jurgenson. They weren’t very good in the mid and late 1960s because of the players they had around Sonny. No running game, a weak offensive line and a defense that probably gave up more points than Sonny and those great receivers put up every week. To where they were one of the highest scoring teams in the NFL every year, despite not having much of a running game.

I believe Dan Marino is the best QB of all time as far as just throwing the football. And had he had the running game and defense that Joe Montana had in San Francisco with the 49ers, Marino leads the Dolphins to four Super Bowl championships or more in the 1980s and 90s. We’ll never know that of course, but that’s how great Dan the man was. But no one handled the ball better than Sonny, as far as play action and knowing exactly when to throw the ball. And what to put on the ball, than Sonny.

I don’t believe a QB ever had better eye-hand coördination than Sonny. The ability to pick spots on the field as far when to throw the ball, how much to on the ball and where to throw the football. He was sort of like the Larry Bird of the NFL when it came to ball handling. And had great eye-hand coördination which is why he was such a great QB. Even though he never led a team to winning a championship.