Free OJ: Video: The Doors, When The Music’s Over: Jim Morrison and The Doors

Posted on February 5, 2012 by Derik Schneider

.
This post was originally posted at FRS Citizen Journal on WordPress

The 1960s was an incredible decade for the Boomer Generation and everyone else. With the Civil Rights Movement, the anti-war movement and all other political movements on the left-wing in America. And also a great decade for pop culture and Rock and Roll. Especially with Bob Dylan, Eric Clapton, Jimmy Hendrix, but one band that stood out for me, The Doors.

The Doors I believe represented the Boomer Generation as well as it could be represented. The Doors who became famous in the late 1960s after being together for a few years. And one member of that band that stood out the most was Jim Morrison. Who was what he called himself, a Rock and Roll Poet. Who use his music to communicate how he felt about life and what was going on in his life.

There’s only one Jim Morrison. Morrison put leather pants on the map in Rock and Roll. Leather pants weren’t common back then with Rockers.
Even denim pants probably weren’t that common either. As they both are today with male and female Rockers. Jim Morrison put leather on the map in Rock and Roll. But also changed what a lead vocalist is supposed to be, which is the leader of the band. Jim Morrison was a lot of things both good and bad. He had a lot of talent and ability as a singer and writer. The ability to be honest about himself and how he saw the World. Who put everything on the line whether everyone liked it or not.

The Lizard King had a lot of intelligence and could communicate exactly how he felt. But he was also an alcoholic, fit the drunk Irishman stereotype like a glove. Who didn’t seem to be able to tell himself he had enough. And would even perform drunk and drink on stage and do crazy things. Like crash to the floor, but was so good of a performer, if anything the alcohol made his performances even better. He picked out his own outfits like the leather suits. Where from 1967-69, was his main outfit on stage and in public as well.

He wore his leathers, cowboy boots, concho Belt everywhere. As a way to draw attention from women on himself and it worked perfectly. So The Doors had this crazy, but brilliant lead vocalist. But with an excellent supporting cast around him. Ray Manzarak on keyboard, Robby Krieger on guitar and John Densmore on drums.

The Doors were like a great football team, with a clear leader. And supporting cast that backed the leader up and all doing their parts to make the team as good as it cane be. So they can be as successful as they can be. And had Jim Morrison not died prematurely in 1970 at the age on 27, they are might still be in business today. Like some other bands from their generation headed to the Rock and Roll Hall of Fame. 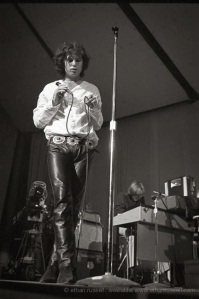