The Atlantic: The Wire: Jon Stewart to Jon Hunstman: The Hunt is Over!: When Your Campaign is Over & You’re The Only One Who Doesn’t Know it 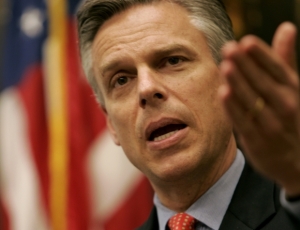 The Atlantic: The Wire: Dino Grandoni: Jon Stewart to Jon Hunstman: The Hunt is Over!

Jon Huntsman has spent the better of the last six months campaigning for votes in New Hampshire, The “Live Free or Die State”, a state that should play well for him and his classical liberal leanings and managed just 17% of the vote. Finishing seven points behind the 2nd place finisher in Ron Paul. GOV. Huntsman was going after the sane vote in the Republican Party. Apparently most of those people voted for him, congratulations. Huntsman is clearly a very sane and common sense presidential candidate. “These are the problems, this is how I would try to solve them”.

Instead of spending years debating the issues and looking for absolute power, he would actually try to solve problems. I give him a lot of credit for that, his problem however is not only is he in the wrong political party for his politics, (ask Ron Paul and Gary Johnson what that’s like) but he’s looking to appeal to sane, credible, intelligent common sense voters. In a party that’s dominated by Religious and Neoconservatives.

Jon Huntsman is running for President in a party where a lot of base cares more about a candidate’s position on condoms, adultery, pornography, same-sex marriage, gambling, than they do who’s got the best economic and foreign policy’s. It’s like searching in a mental hospital for the sanest people there, that don’t work there. Finding a couple of people who are about to be released and then wondering why there are so many crazy people here. It’s a mental hospital for Heaven Sake!.

As GOV. Huntsman likes to say on the campaign trail. What were you expecting to find, college professors. And that’s the state of the GOP right now, there too many crazy people for a common sense classical liberal or conservative presidential candidate there. Personally I believe Jon Huntsman would make one hell of a Liberal Democrat. In the sense of what liberalism really is and not how its stereotyped today.

And when the clock finally goes off in his head and he realizes that his time is over in the GOP, I believe he should consider a 3rd-party bid. Not to win because that’s not going to happen. But just to let the American voters who are fed up with out two-party System, that there’s other options out there and people who think like them.
.