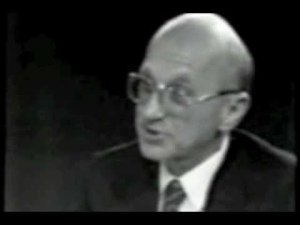 Source:Liberty Pen– Professor Milton Friedman, on The Open Mind with Richard Heffner in 1975.

“Milton Friedman explains the dynamics that naturally lead toward collectivism—and away from the far preferable state of individual liberty… Liberty Pen.”

I guess, in Milton Friedman’s world, there would be no public safety net. That if people fall through the cracks of capitalism, that thats too bad and they are stuck in that condition. Unless they can get themselves out of that condition on their own, or help from private citizens. To help them out, that we would go back to the days pre-New Deal, or even the Federal Reserve Bank. And that perhaps we wouldn’t even regulate the economy at all, except for anti-monopoly laws. Dr. Friedman, was anti-monopoly. Both public and private and believed that individuals and corporations, shouldn’t be able to pollute the environment as well. That they should even be taxed when they do. Dr. Friedman, is sort of an inspiration of the Tea Party movement on economic policy.

Even though the Tea Party at least generally speaking, isn’t as liberal on social issues. There are also some Tea Party members, perhaps a majority even that are in favor of Social Security, or Medicare. Perhaps because they collect from both of those programs, or their parents collect from both of those programs. And they don’t want to see the benefits for themselves, or their parents to be eliminated and for them to have to fend for themselves. But would like to see some of these programs reformed in a way that allows for more freedom of choice. But there are also some Tea Party members, people who support Republican presidential candidate Ron Paul, who’s a libertarian ideologically, who would like to see our safety net completely ended or phased out.

Representative Paul, has proposed phasing out our social insurance programs instead of eliminating them right way. So the people who currently collect from them, would still get their benefits. Republican presidential candidate Gary Johnson, has proposed transferring these programs over to the States. So Dr. Friedman, has been an inspiration to Classical Conservatives and Libertarians and Liberals such as myself. But hasn’t been the Gold Standard for the Tea Party movement, but someone who they’ve used to generate their own ideas. They agree that what the Federal Government is doing in certain areas is wrong. But they have similar, but different views in how to change them. So Milton Friedman, has been an inspiration to the Tea Party movement, but not its driving force. And more of an inspiration for Ron Paul and other Libertarians.

Libertarians, are clearly against the New Deal and Great Society and other progressive social insurance programs. And is a big inspiration for their movement and the formation of the Libertarian Party. But the Tea Party, is a bit different, because even though there are some Libertarians in this movement, they became a political movement based on a fiscal conservative message and they aren’t for eliminating Social Security and Medicare. But would like to see the Federal Government cut back and eliminate spending in a lot of areas. So Dr. Friedman, has inspired parts of their movement, but doesn’t represent their playbook. Similar, but different policy’s.