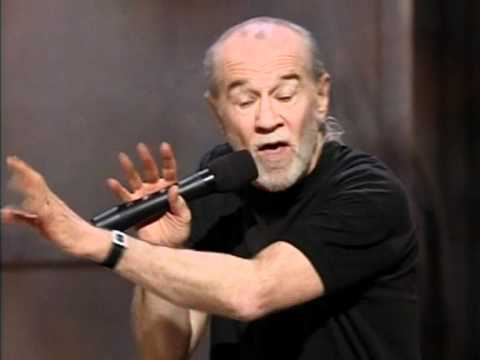 I like George Carlin’s point about motivation because it would be one thing if you had someone advising to do the right thing because of these reasons and they know what they’re talking about because they work in that field and you’re a narcissistic, egotistical, arrogant asshole, who believes the planet evolves around you and you’re so damn smart you see things in the future that no one else does. ( Take Donald Trump to use as one example ) 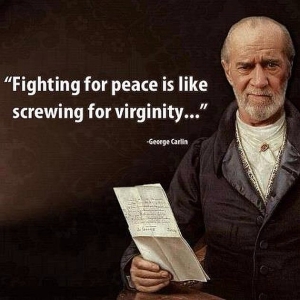 Source:  I Am Awake– The Great George Carlin

And let’s say you’re being sued or are under criminal investigation and your lawyer is telling you, “you know what Joe, I really don’t think it would be a good idea if you testify and go under oath. Sometimes I’m not sure if you’re telling me the truth and I’m your damn lawyer, for God sake! Hell, I’m not even sure if you’re being honest with me.” And your lawyer motivates you to do the right thing and not take the stand. But it’s another thing if you’re a pro athlete lets say and you’re in a big game perhaps even playing for the championship and you know exactly what the consequences are if your team wins lose. Someone in that position will either play their best game or play very well or not. It depends if they’re good enough to win the game or not and how badly they want to win that game.

As far as religion

I’m an Agnostic, so don’t even think about thinking that you can blame me for either the religious fundamentalism in America from the Christian-Right or Islamic fundamentalism from the Middle East and other places around the world, because I’m Agnostic and I simply don’t give a damn about religion.

As a Liberal I believe free choice, free will, free speech, free thinking, individuality, individualism, personal responsibility, the opposites of what even a moderate or social democratic religion would believe in, because religion almost by definition is very collectivist. “This is what’s right and wrong, this is how you should live your life, and this is what you should believe.” I’m just not down with that ( to use a 1990s expression ) and my idea of morality is about how people treat each other, not about how people treat themselves and live their own personal lives. Those are my moral values which is about treating people the way you want them to treat you.

I just wish this George Carlin performance was ten years later instead of coming out in 1996 and we could see what Carlin thinks about our reality TV and celebrity culture, well culture and seeing reality TV and celebrity culture not just dominate American culture, but now have invaded our politics and government. I believe a lot of stupidity in America comes from faddism and the need to feel like you’re cool ( I’m sorry, I mean awesome ) that need to be popular and hip consumes practically everything else even our morality. My point earlier about morality being about how we treat each other, instead of what we do personally. Sometimes its considered cool to bully people that you believe are inferior. We see that in high school everyday.

Thanks to celebrity TV which is what reality TV really is, or perhaps nasty TV is a better term being nasty and stupid is considered cool and is rewarded everyday. The only smart people that are rewarded are business executives who run companies that produce the products that are considered cool in America. Fashion, new technology, coffee house coffee, to use as examples. But if you’re simply just trying to make the world better or at least your small part of it better and you’re a very intelligent person, unless you’re considered hip and communicate with young people very well, you’ll be looked down upon as a nerd who reads too much, spent too much time in school. Love to know what George Carlin would bet saying about our over consuming reality TV culture today.

Not a boomer obviously being born in the mid 1970s and I’m not even a son of one. Both of my parents were born in the 1930s and had kids relatively late in life, so I don’t have much personal experience with at least who I would call Baby Boomers ( people born in the 1940s and 1950s ) but I’ve worked with people from this generation and most of my teachers were Boomers. I like to look at them as the entitled generation.

Being born during or just after World War II ( depending on how you define the generation ) and growing up in the 1950s and 60s, as a generation they’re like your typical Connecticut Anglo-Saxon Protestant family who’ve been in this country since the 1700s, who live in the suburbs and started out in life with a million dollars thanks to their father’s. They’re the spoiled brat generation would be a way to look at them. Growing up during the economic booms of the 50s and 60s and not having to worry about how they were going to pay for college or if they were even going to be able to get into college. But I’ll give them credit for taking advantage of every opportunity ever given them and becoming one of if not our most productive American generation’s.

If you order a cheeseburger and are served a cheeseburger, do you really have any right to expect your cheeseburger to taste like a tunafish sandwich? With politicians it’s the same thing you get what you voted for or at least elected. You vote for and elect crooks and liars, don’t expect to get Saints instead. And this whole deal about not knowing how crooked and lazy the politician was before you voted for that person, is like someone complaining about the apples or oranges that they bought at the store not being ripe enough and being old. If you bothered to look at the fruit that you were buying before you bought that, you would’ve seen that it wasn’t fresh fruit and maybe you should buy something else. You don’t do your homework when it comes to voting, you end up voting for people you don’t know very well and get screwed by them in the process.

Life is what you make out of it. You get yourself a good education, you apply yourself, do the work, make learning and daily thing for yourself and always looking to do things better and make yourself as productive as possible, do your homework to go back to my point about politicians and life in America will be very good for you. At the very least doing these things for yourself and again treating people the way you want to be treated, taking responsibility for your actions to get to my point about morality and that will be your best offense and game plan for success in this country. But you don’t do these things and expect success and happiness to be given to you and you’ll spend a lot of your life waiting for success and happiness.