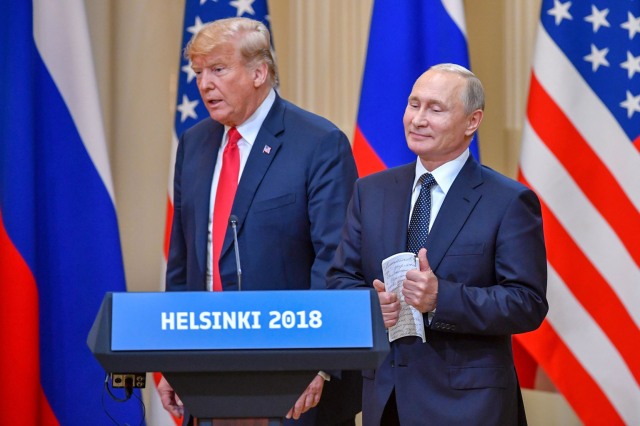 Source: Foreign Policy Magazine– Vladimir Putin, ” I got my doggy Donald, right where I want him.” Or perhaps something else in Russian.

I don’t like talking about the President of the United States like this, simply because it makes America my country look bad and I actually respect the office of the presidency regardless of who serves in it and because a lot of very good men have served in that office in our history, but I don’t respect President Donald Trump for several reasons.

As much as Donald Trump likes to talk about “make America great again”, as if America is not already great which is an insult to a lot of Americans is not most Americans and an insult to America as a country and helpful to our adversaries around the world and to the Far-Left in America who doesn’t see America as a great country and see us as the real evil empire in the world and as much as his base who live in 1950s American emotionally and personally, even though physically they’re unfortunately living in modern America that the rest of us have to put up with, it’s not so such America that they love away, but there part and people in America that they love. 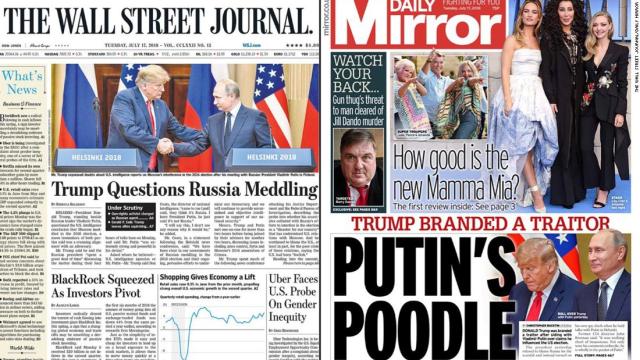 Source: CNN– The Daily Mirror, on the Trump-Putin Summit

And as much as Trump voters want to chant USA at the Trump reality show political rallies, Donald Trump is not an American Patriot. A New England Patriot perhaps, because of his relationship between Bob Kraft and Tom Brady, but he’s not an American Patriot. He’s a Trump narcissist and money lover who would sell America down the Hudson River if he thought he, his company, and family would profit from it. And this staged press conference which was really just an ( pardon my American ) an ass kissing contest, where it was the only time where President Trump came out on top of President Putin, by kissing Putin’s ass more during the summit.  The so-called summit with President Vladimir Putin of the Russian Federation on Monday, are just more examples of that.

If Vlad tells Don, that he and his government didn’t interfere with the 2016 American elections and aren’t interfering now, than Don takes the word of his daddy Vlad, because Vlad promised Don that he would given him a treat after he takes him for a walk later if Don is a good boy. And in this case that means not accepting the word and intelligence of his own Director of National Intelligence Dan Coats, who is an American military veteran, who severed in Congress both House and Senate for 24 years including serving on the intelligence committees in Congress. As well as taking Vlad’s word over the rest of the American intelligence community that says Russia, interfered with the 2016 elections and are still interfering with our elections.

You can make the case that President Trump and his administration, have been tough on Russia with the new sanctions and kicking Russian diplomats and intelligence officers out of the country. There are a few problems with that. President Trump, was essentially forced to do those things by Congress when they passed their sanctions bill that didn’t include a waiver in it allowing the President to waive the sanctions unilaterally at any point. They just didn’t pass those sanctions, but passed them overwhelmingly in spite of what the Trump Administration wanted and didn’t work with them on the sanctions. Just told them they were going to pass this legislation that passed with over 400 votes in the House and 98 in the Senate. Had the President vetoed that bill, he would’ve looked like a bigger schmuck or dog for President Putin, than he already is, ( if that’s possible ) because Congress would’ve overwhelming overridden his veto with a bipartisan vote.

Again, I don’t like talking this way about the American President, but unlike those 65 million or so Trump voters, I’m not one of his puppies or puppets, or a member of the Trump Cult. Or work for Fox News, which means I have the freedom to speak for myself and actually look at evidence and facts. And all of the objective evidence and facts is that Vladimir Putin could have something horrible on Donald Trump, that Don doesn’t want to get out. Which would explain why President Trump who is supposed to the President of the United States, is so nice at least in public to President Putin and looks like a tool or Poodle for President Putin and the Russian Federation.

1 Response to Foreign Policy Magazine: Opinion- Jeremy Shapird: ‘Donald Trump Is Coming Off As Vladimir Putin’s Poodle, But That Actually Undermines Russia’s Ultimate Goal: Vladimir Took His Poodle Donald Out For a Walk