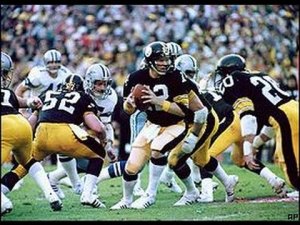 If you look at the two teams in this game and their personal and the two coaching staffs, led by Tom Landry and Chuck Knoll respectfully and how great both teams were in 1978 and the fact that this game decided who would be the NFL franchise of the 1970s, the Cowboys or Steelers, this is the best Super Bowl at least of the first thirteen, of all-time. I still believe it is the best Super Bowl of all-time, especially if you look at the two teams involved and how they played in this game. The second Cowboys-Steelers Super Bowl and the second Super Bowl that they played against each other that went down to the last possession of the game. That is how close both teams were and how well they played against each other.

This Super Bowl was so good as far as how they game was played, it was almost like an all-star game. If you look at the talent of both clubs. Each team with a Hall of Fame head coach. Hall of Fame quarterbacks for both teams. The Steelers starting two Hall of Fame receivers in John Stallworth and Lynn Swann. The Cowboys with two Pro Bowl receivers in Drew Pearson and Tony Hill. Pearson, at least should be in the Hall of Fame. Two of the top three tailbacks in the league at the time and who are both in the Hall of Fame. Franco Harris, with the Steelers and Tony Dorsett with the Cowboys. And that is before I get to the Steel Curtain Defense of the Steelers and the Doomsday Defense of the Cowboys.

The Super Bowl, is supposed to be the game between the two best teams in the NFL. It is called the Super Bowl for a very good reason. It’s supposed to be a great game between two great teams. The first twelve Super Bowls were blowouts for the most part. The Cowboys won two of those blowouts. This wasn’t the first real Super Bowl. Super Bowl 10, again between the Cowboys and Steelers was also a real Super Bowl. Super Bowl 7 between the Dolphins and Redskins was also a good game. But Super Bowl’s 10 and 13, were exactly that. They were true Super Bowl’s and the only two of the first thirteen. And again, if you look at both teams and how they played in this game and it went down to the last possession of the game, this game is the best Super Bowl ever.