Richard Nixon being the very smart if not brilliant politician that he was, knew about the dangers of Watergate as soon as he heard about it and what the burglars were breaking in to. I mean think about it, you have Republican operatives who are at the very least connected with the Nixon reelection campaign accused of breaking in to the Democratic National Headquarters. Richard Nixon is President of the United States at the time of course and obviously a Republican, so of course the media is going to want to know what involvement did the Nixon White House have if any in the burglary.

So what President Nixon wanted to do at least early in the story, was to get the story finished and over with. So no one could make it look like someone in the White House ordered the operation, especially the President. And that the Nixon Campaign wasn’t breaking into Democratic Headquarters illegally to steal information and use it against the George McGovern Campaign. President Nixon saw Watergate as a time bomb that could blow up his reelection campaign and turn what was a runaway blowout victory, into a close election with Senator McGovern and perhaps even hurt his presidency.

So when President Nixon tells his Chief of Staff Bob Haldeman to tell the FBI, “not to go into Watergate any further, period”, he was trying to put an end to the story and get the country passed Watergate and back to the issues that his administration was focusing on. And his reelection campaign and back on pace to his forty-nine state victory and winning 3-5 of the popular vote in 1972. The facts are, Watergate didn’t hurt President Nixon at all in 1972. Its early 1973 when Watergate becomes a big story and when Congress gets involved in it starting in the Senate with their bipartisan investigation of the story in the summer of 1973.

The Washington Post led by Ben Bradlee, Bob Woodward and Carl Bernstein were focused on Watergate from the beginning. And to a certain extent CBS News and The New York Times. But The Post was really where the action was in this story from the beginning. And when they started breaking stories and getting hard information about the story, the other major national news organizations, network news and the papers and Congress as well started looking into this story. And the more facts that came out about it and the fact that the White House was trying to cover it up, the worst President Nixon looked. 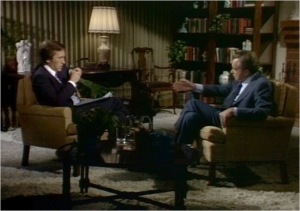