Posted on December 15, 2014 by Ederik Schneider 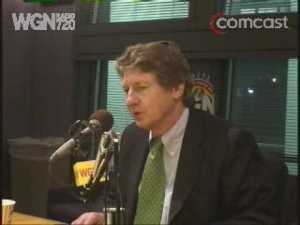 The timing of this interview is perfect because the General Motors and Chrysler Motors were facing bankruptcy and perhaps even at risk of going out of business. Which would’ve been a disaster for America and not just because of the lost of good jobs that it would cost the country. But also in prestige that it would’ve cost the country. The world’s only superpower that would’ve been down to one motor company being Ford. GM and Chrysler were both bailed out in late spring or early summer of 2009, which is when this interview was done. So they were definitely talking about a relevant subject here.

GM and Chrysler, the number one and I believe maybe tenth largest automobile company in the world in Chrysler’s case, ( that is an estimate from me ) were both saved and are both back in black today and have been back in black for several years now. Millions of jobs saved, fewer people being unemployed in the heart of the Great Recession as a result, the country didn’t collapse. So right now that GM and Chrysler bailouts that both came conditionally, are looking like very good investments right now.

But why did GM fail? I would argue because they stopped making good cars. The Caprice, which I believe was a great car or at least a borderline great car. Sort of a combination of a big luxury car, but that had very good power and handled well, a very popular police car. GM stopped making that and they stopped making the Monte Carlo, which was a big sporty car, with great power and handled very well, but also very comfortable. Sort of like a sporty luxury car. They tried to become more like Japan with smaller cars, because so many Americans were buying Japanese, but their cars simply weren’t as good.

Oldsmobile is now out of business, but Buick which is like the little brother of Cadillac, smaller cheaper luxury cars, are still around. Pontiac, which I at least is a better version of Chevrolet, at least with their sporty mid-size cares, is out of business as well. When these companies under better management, should still be in business today. Chrysler essentially over promised their employees with benefits and when the Great Recession hit, they got hit in the head over and over on that and eventually got knocked down.

Chrysler might be the best of the big three in America, even though they are number three. Ford Motors is the best run of the big three and didn’t have any financial difficulty in this period and the only one that didn’t need or take public assistance. Ford Motors runs two other profitable auto divisions, Mercury and Lincoln and their cars are doing very well right now. Their cars and trucks, the Taurus might be the best sporty mid-size car in America right now.