The 1980 Presidential Election wasn’t interesting because of how close it was, because that presidential election was decided over the weekend. Actually it was decided by 8 PM on election night. The Carter Campaign just didn’t know that yet and you can make a case that presidential campaign was over after the debates. Where the American people were clearly in the mood for a change. The economy was in the toilet with high unemployment, interests and inflation rates. With of course another recession in 1980.

America being embarrassed by third world Islāmic terrorists in Iran. And with Russia on the march in the Middle East. And the only outstanding question and it wasn’t an outstanding question because of how intelligent a question it was, but because it was the only question that was left on the table and to put to finally sum up a long question, that might feel like a story now, was Ronald Reagan competent, sane and still alive.

Ronny answered all those questions in the affirmative in the debates, which is why he won something like 56% of the popular vote and forty States. The 1980 Presidential Election wasn’t interesting because of the end result, but because of everything that led up to it. All of the background that led up to the 1980 presidential election. All of the backstories that were behind the 1980 presidential election. From both parties that made the 1980 general elections one of the most fascinating general elections America has ever had.

On the Democratic side you had a President in Jimmy Carter, whose approval rating was lower than a baby dwarf. And because of that was facing a primary challenge from a very popular politician in the Democratic Party. Who was probably the most popular Democrat in America at the time Senator Ted Kennedy. But if you want to know how not to run a presidential campaign, look at the 1980 Kennedy Campaign for President. Ted Kennedy is the author of the book, How Not to Run For President. He wrote the bestselling book while campaigning for president.

And on the Republican side you had an actor playing the role as the frontrunner! His best role and movie ever that people actually went to see and enjoyed. But the difference being that Ron Reagan didn’t make a dime off of this movie, it all went to his campaign. Running against George H.W. Bush, the Manager in Chief. “Vote for George Bush because I have a great resume. I know how to run things.” George Bush had a hard time inspiring QBs to throw the ball. Or getting dogs to bark, but he did have a hell of a résumé.

2008 was a great Presidential Election, but mostly because of everything that led into the general election. Because after the economy crashed in September and Barack Obama passed the tests in the debates, most of the country that wasn’t living in a mental institution and was alive, knew that Senator Obama was going to be the next President of the United States.

Again because America still saw Ron Reagan as a bit of a risk, wasn’t sure if Reagan was ready for the greatest role of his life. A movie that people would actually see, it wasn’t until late October that we knew he was going to be the President. And after he passed those tests the competitive part of Election Day 1980 as far as the presidential election was over around 5PM Pacific Coast Time. One of the biggest blowouts in American political history. 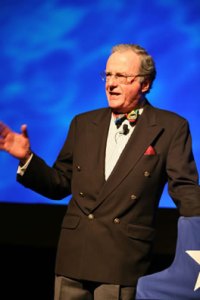 Perhaps Not the Mark Russell You Were Thinking of